We’ve been waiting to bring this idea to the market for over a year, and now we’re finally at step one of the plan

(that we mapped out nearly 18 months ago) 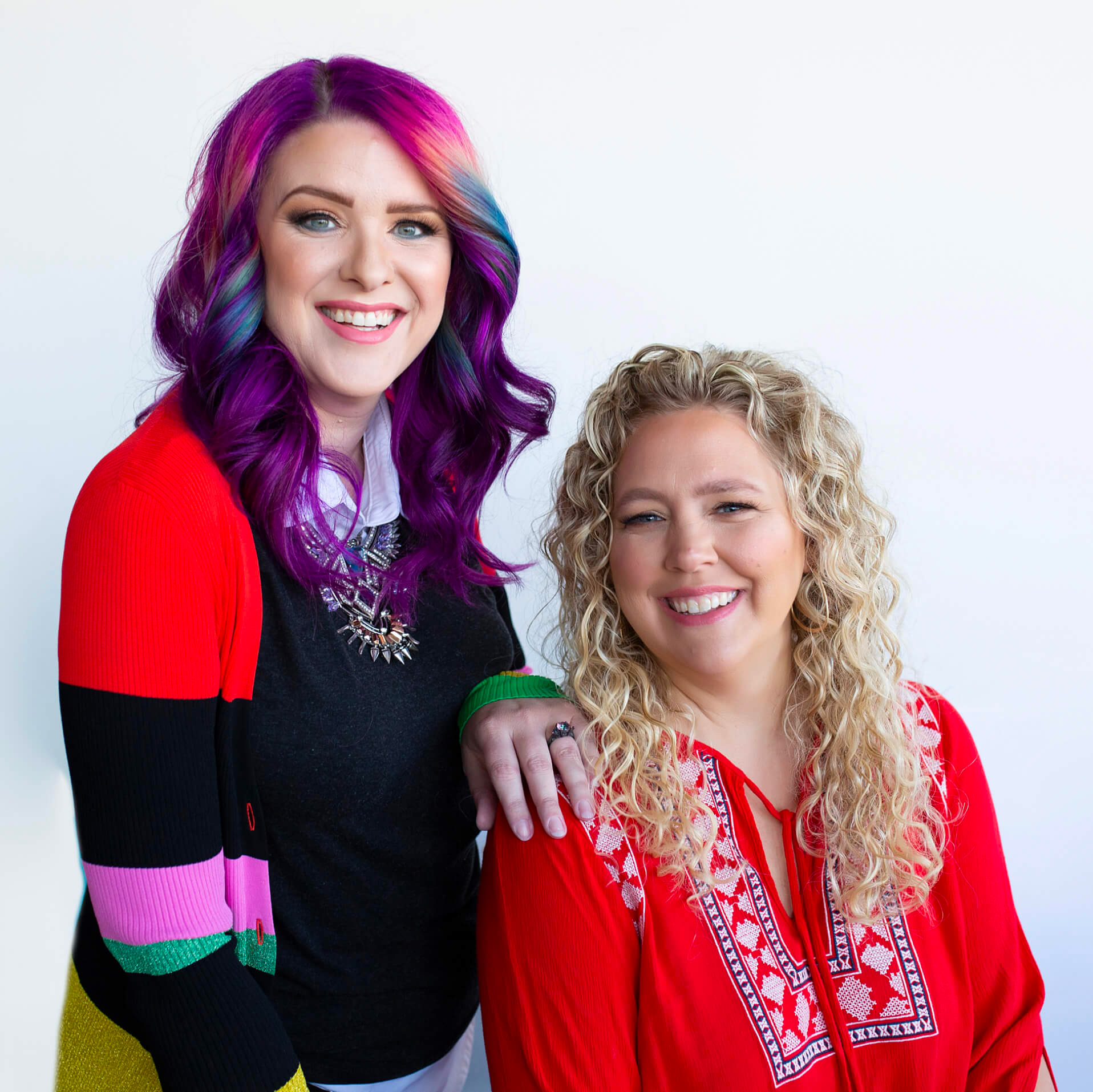 To our Funnel Gorgeous community,

Today we have something very special to share with all of our customers and followers.

By now you have heard that Funnel Gorgeous is going into software.

﻿But what you may not know is how we got to this point, so if you’ll give us just a few minutes, we want to take you behind the scenes of this decision, and more importantly, what it means for you.

The mission + movement behind Funnel Gorgeous is simple, and remained the same since we began.

And as we’ve grown, we’ve added the third pillar to these two incredibly important principles:

That’s the foundation of our Marketer’s Heart group + event, and we infuse it into everything Funnel Gorgeous does.

In our attempt to change the industry, and create a customer base that would no longer be happy with the status-quo, scammy Internet Marketing scene, we had a realization.

We knew if the things we loved, like online marketing and sales funnels were really going to go to the mass market, we needed - to be frank - to clean this place up. The internet was a pretty grimy, unethical space.

Our plan: Arm everyone with products that help them blend great design and great marketing... in a way that’s ethical and in alignment with their brand.

We knew it right away... this was the magic sauce of what we wanted to do.

But... as time went on, we started to notice an annoying reality.

The platforms we were recommending weren’t necessarily set on the same path. Here we were, using software that was growing glitchier by the minute, struggled with excellent customer service, and frustrated our users.

It wouldn’t do... not if we wanted to really get our brand out into the mainstream market.

That’s when the idea of software began to take hold.

One day we sat down and mapped out exactly what we wanted.

The best kind of dreaming right? 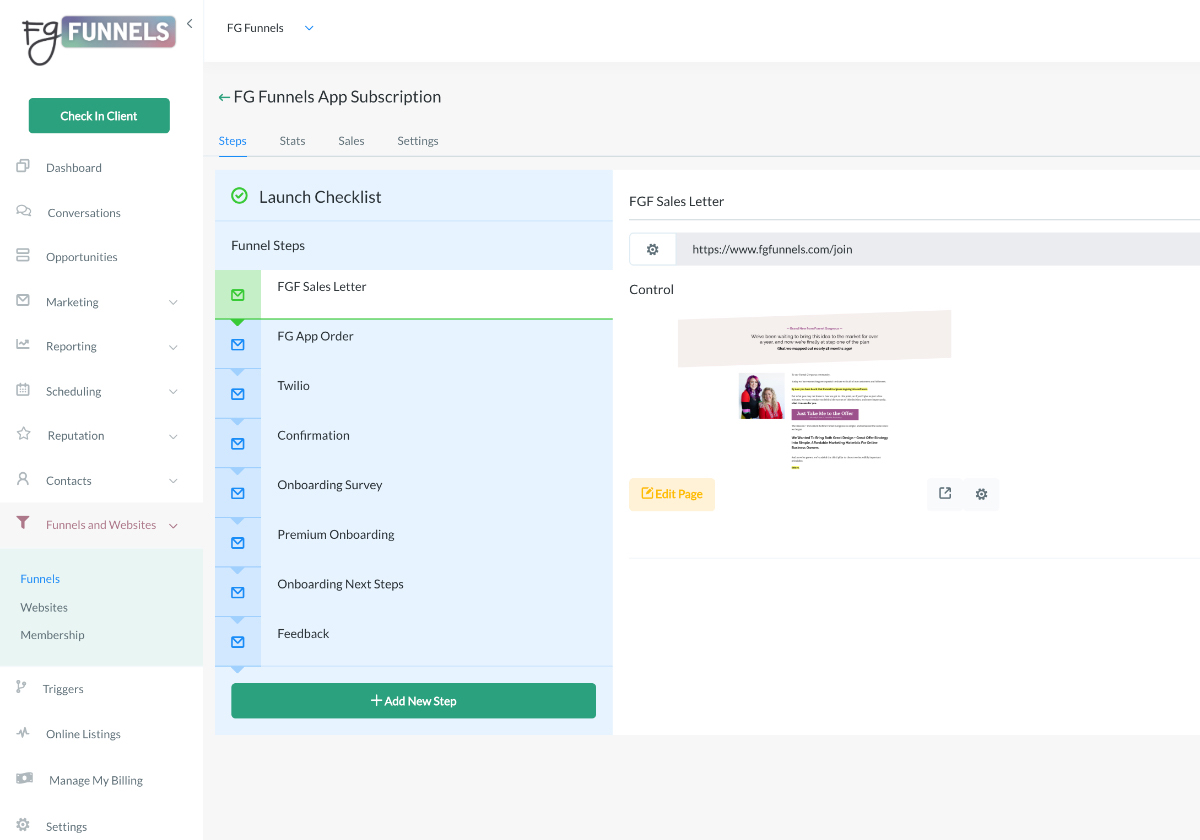 Of course, we wanted all the features we’d come to know and love, but we also dreamt up some other cool new features that would be so cool to have.

But... to build a brand new software from the ground up would cost over $1M dollars and at least a year (or two) of time.

That’s when we realized the answer in front of us this whole time:

Private-label, enterprise-level, feature-rich software that’s already made and then we'd work to build add ons and extra features over time that would interact with it seamlessly. To infuse the Funnel Gorgeous culture and mission on an already built engine... and offer a real solution.

Even still it felt like this idea was months and months away, but then in June 2020, George Floyd was murdered. And this was hardly the first time this had happened. Ahmaud Arbery. And Breonna Taylor. And...

...Though it pains us to admit this should have been apparent much much sooner, we realized we couldn’t just keep spending money with companies that didn’t share our values.

And we could no longer just recommend a software because it did what we needed it to do...

It also needed to align with our mission. Like, yesterday.

With a new sense of urgency, we connected with the owners of a software development company named High Level, and began negotiating how we might bring their software in house under our FG brand.

After a few months of back and forth, and a laundry list of features we wanted to add, we had a deal.

And that day, FG Funnels was born.

Our vision for what we’re about to do is big, and we knew we’d need an entire TEAM of developers to help support a feature rich software that does so many things all in one.

We knew we'd picked the right one: the High Level development team has been supporting over 6000 private-label customers over the past two years.

Nope, this isn’t a baby BETA software. This is powerful software that other big industry players like Sam Ovens and Billy Gene are starting to use, because (duh) they see its potential too.

It’s the best sales funnel, membership, CRM, automation tool on the market... and although no one solution has everything everyone needs, this one comes pretty darn close.

FG Funnels is fully ours, and a fully private-labeled solution.

That means we pay them a user fee per user to host you - our beloved customer - to help you build your funnels. Heck yes!

That means you have:

...and enterprise-level HL software is the silent engine in the backend doing all the heavy lifting of development, so we can do what we do best... marketing with heart!

Over the next year our goal is to get all of our designs, courses, and education integrated with FG Funnels. 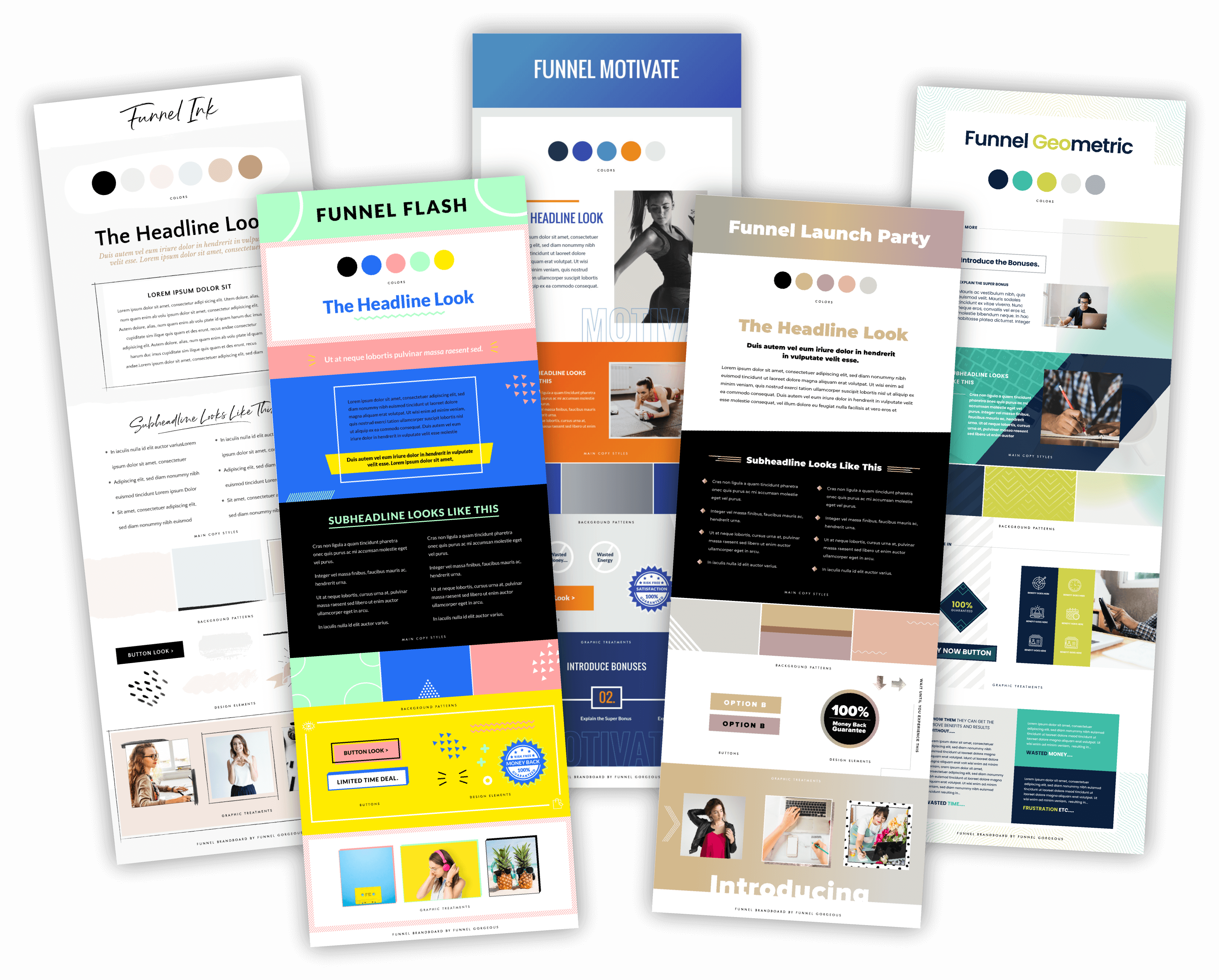 We want you to be FG Funnel ninjas, so our marketers will get free education on how to leverage the software. We even plan to give out automations + other materials to make things easier and more powerful.

In other words, we will provide our signature Funnel Gorgeous support.

And of course, we’ll make sure it’s affordable. 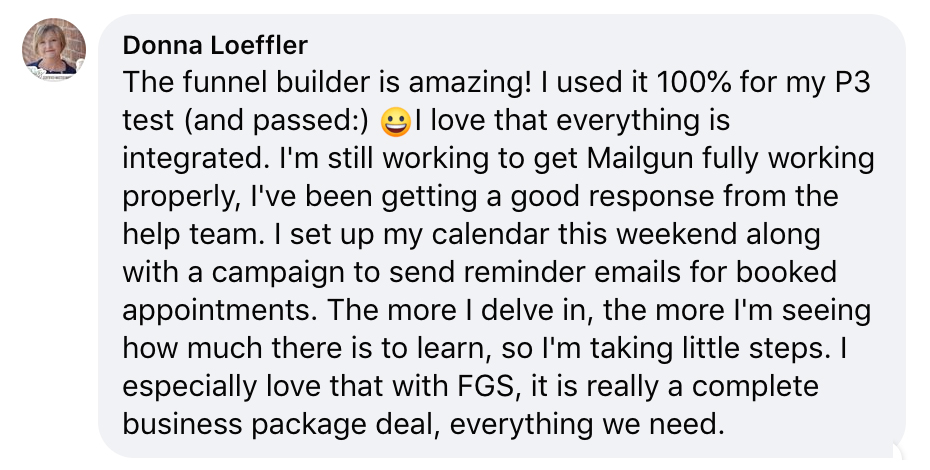 Today, we’re extending you an invite to join us and become a founding Unlimited member.

In an industry where a new software is popping up every five minutes, it can be confusing to try and figure out which one is right for you.

Given that we have over 9000 customers, Cathy has worked with multi-million and billion dollar brands, and Julie works with 100 entrepreneurs 1:1 (plus has a history as VP at a SaaS company), we know what works and doesn’t work with long-lasting brands and software.

FG Funnels is the best solution on the market when you combine features, user experience, and marketing automation.

Here’s a list of just some of the things FG Funnels can do: 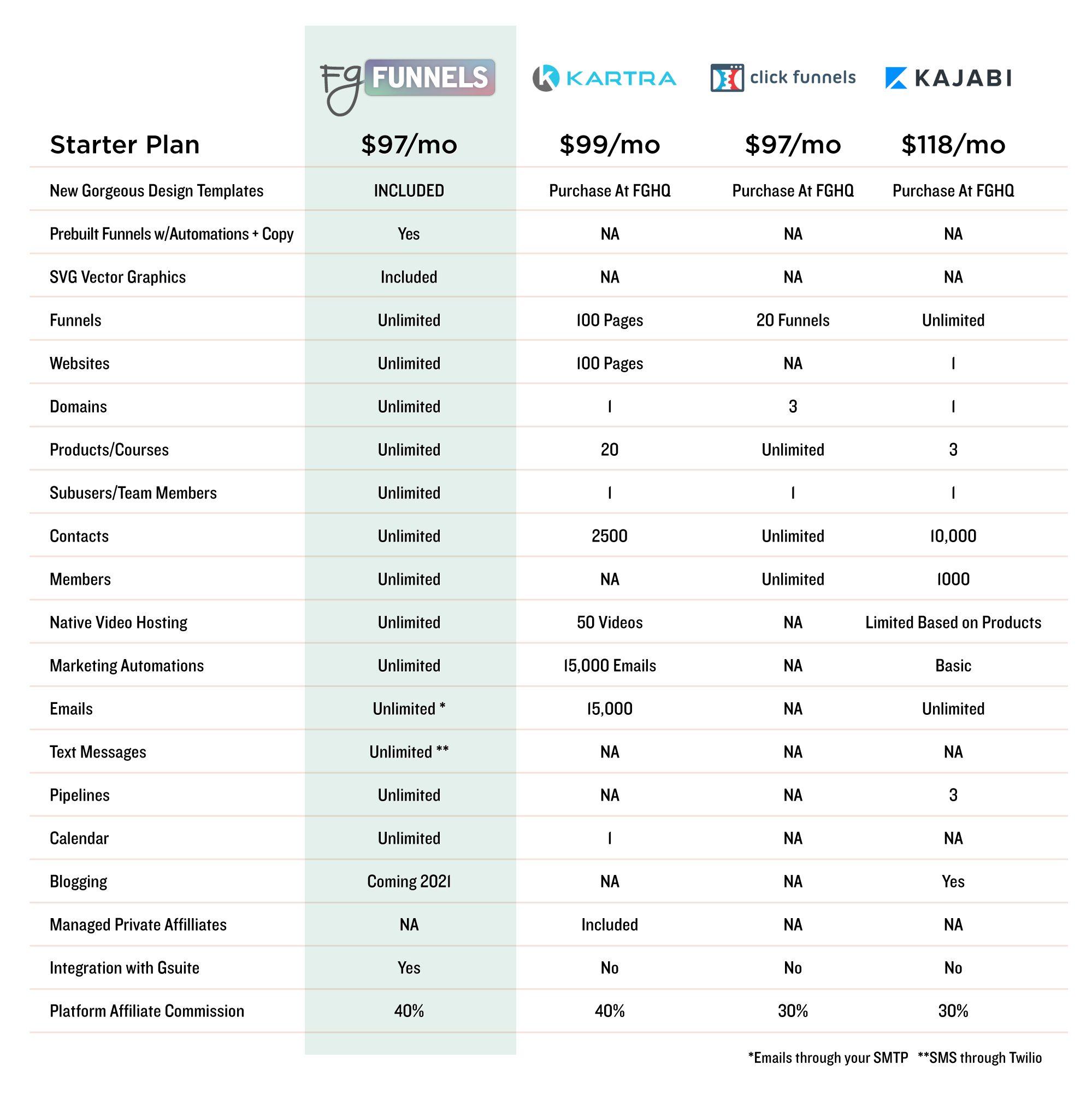 Exciting, right? That means you can effectively replace…

In addition to all of that, Funnel Gorgeous is adding a new level of awesome.

A few things to note about our software before we tell you the founding members deal:

To roll out software this good is a big deal and we’re working as hard and as fast as we can to get all our design collections migrated over.

We currently have available to our users, the following designs:

Once you’ve set up your account, just email us at support@fgfunnels.com and we’ll load in whatever you need and previously purchased.

We’re working hard to get EVERYTHING done, but it’s effectively over a year of design work in just a few week’s time so it’s taking a bit of time.

Please Note: Every account will get Funnel Minimal totally free when you sign up, and then whatever templates you had bought previously, we will simply load into your account for free when you email us.

And don't forget... every new design that comes out - you will get as long as you are an active user!

You will also need a Mailgun + a Twilio account. Those are separate services. They are the SMTP and texting engines that power the powerful automation features in FG Funnels.

This is the most difficult part of setup so be sure to watch the videos as you sign up so we can help you get that sorted.

Once that’s done, it’s smooth sailing from there!

We’re working to have fast and responsive customer support, but we are still building out the infrastructure to make that as streamlined as possible, so please be patient with us!

That means as long as you remain an active member, that tier will be honored.

For Founding Members, there is no limit on:

Best Software Out There

We’ve had some people ask us about hosting client funnels and due to the sales features and automations, you cannot host other clients in your account.

It’s one business per account. If you’re an agency trying to host small businesses in your own account, then we are not the right solution for you.

However, if you want to sign them up under your affiliate link, we can give your user account access to your client’s accounts, making it super seamless to toggle through accounts. And, we offer 40% recurring commission as an affiliate.

In full transparency, there are some features that we are STILL waiting on that won't be fully functional when you sign up*

*We expect all these things to full roll out in the first quarter of 2021.

Other features that are coming out (per the developers)...

Ok, but where's the catch?

We can’t keep the Founding Member Unlimited deal around forever. We’re promising this to our first batch of users, after at which point we’ll most likely have two tiers of access, and pricing available.

There are no contracts. Cancel anytime. 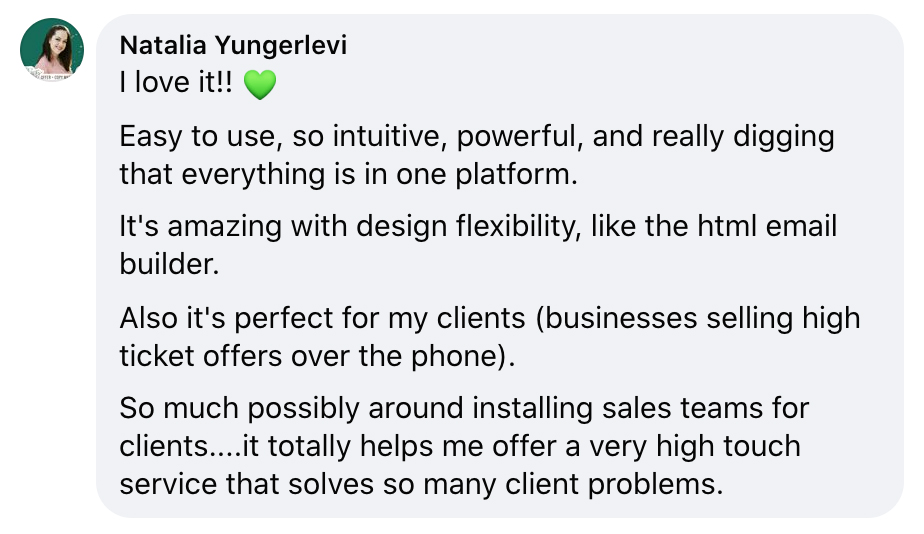 We Are VERY Excited To Embark On This New Adventure With You All.

Plus with FG Funnels you get...

*Email + Texting will require SMTP services and Twilio to activate. These are separate services.

**Our design collections are currently being rebuilt in FG Funnels. Not all are ready yet, but as soon as they are, we will gift them to you.

Especially considering if you were to buy it all separately, you would be spending over $1,300/mo (which would still be a great deal by the way).

Here's the deal... we decided to create a super special way for you to get all the above at an incredibly low investment.

So low, you might think we've gone a little crazy, that’s okay.

You can get the Unlimited access and all the Free bonuses, when you join us inside FG Funnels at the low price of just...

Only for the first 1000 users (many are already taken), we’re doing the $97/mo Founding Members Unlimited account.

so if you're ready to rock with us...

let's get started below.

When you join FG Funnels before January 24th, you'll receive the Simple Collection: 3 new funnels PLUS the full automations included.

AND on top of that, you'll also receive these Bonus Premium designs: 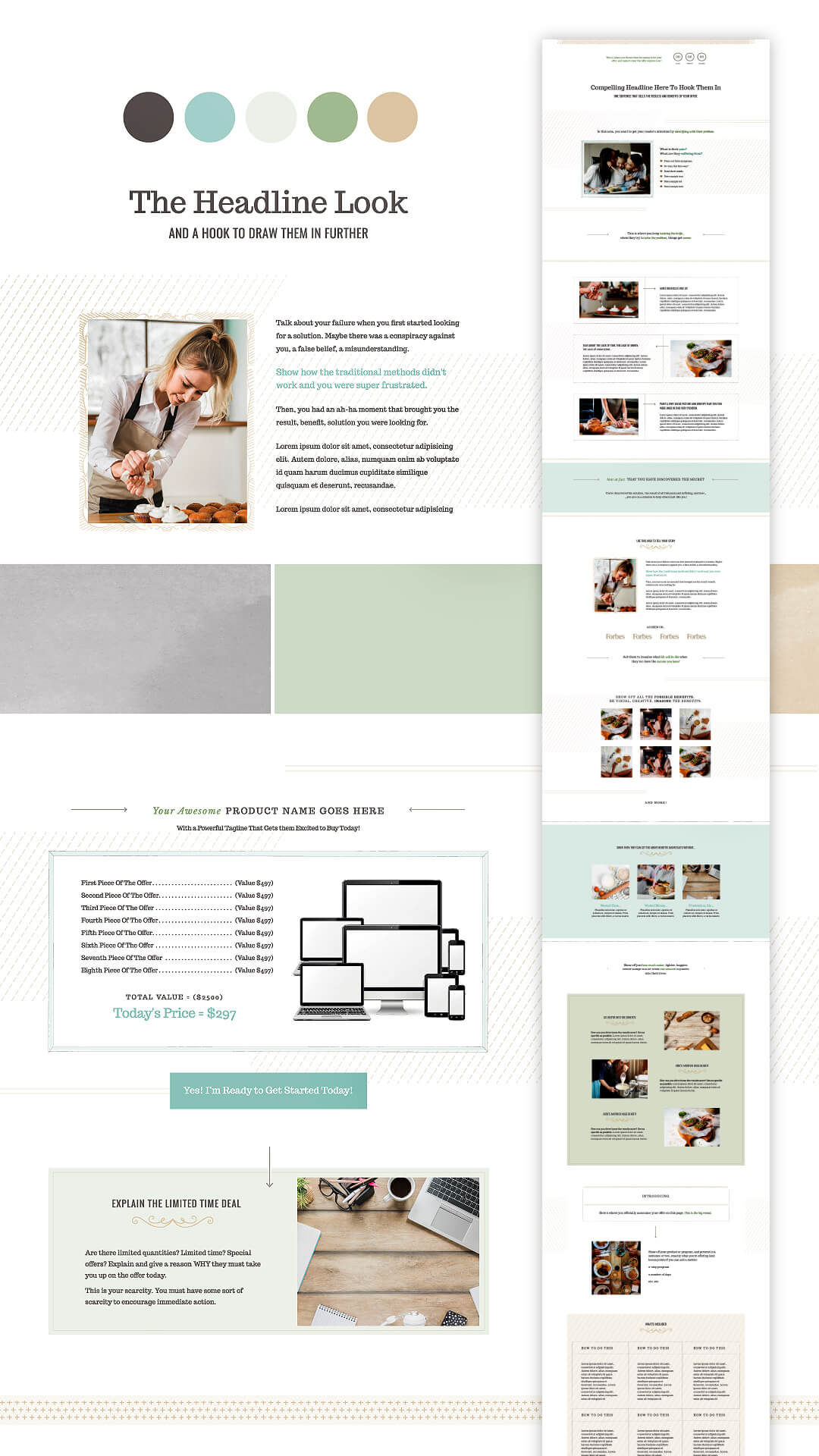 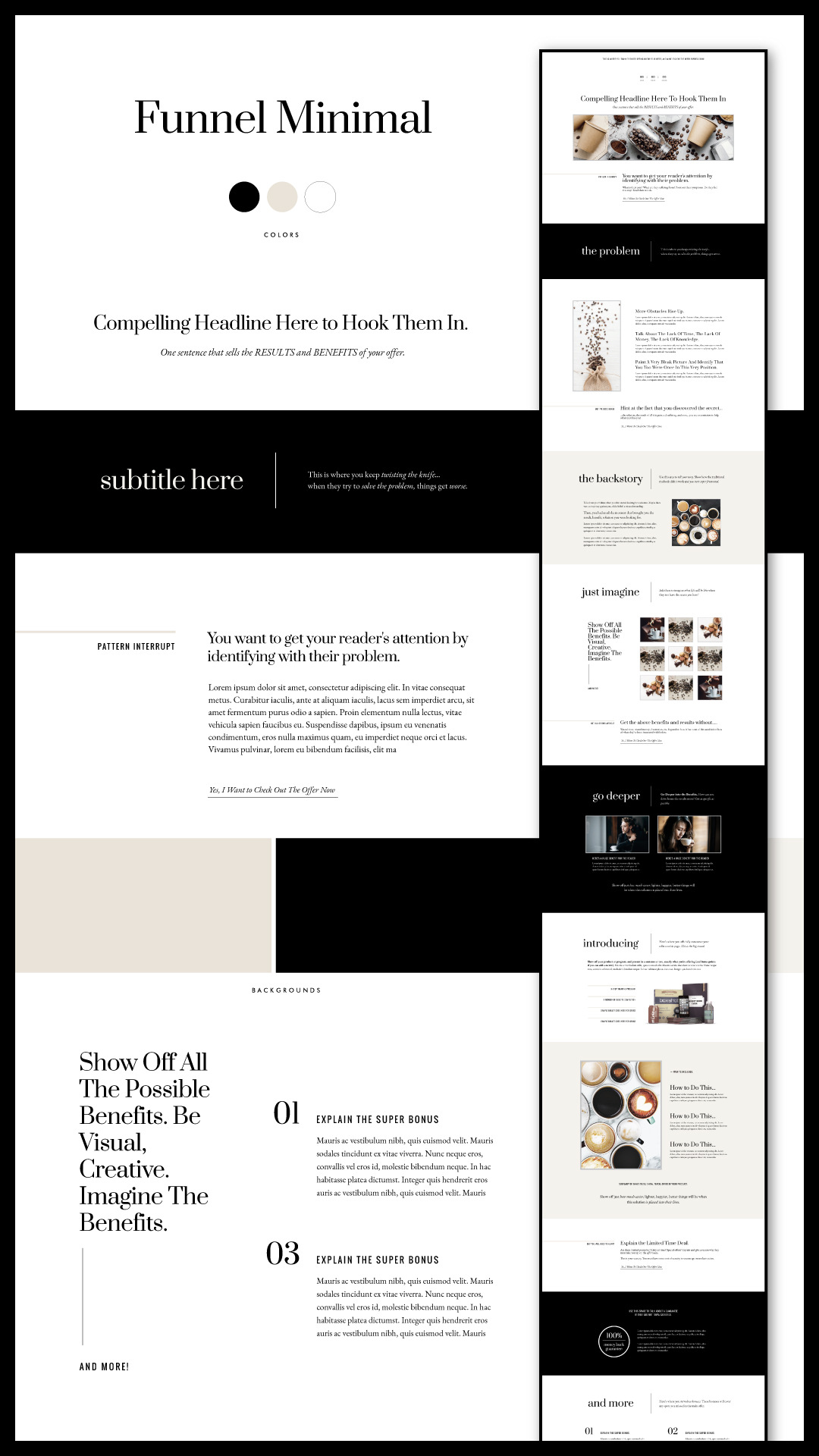 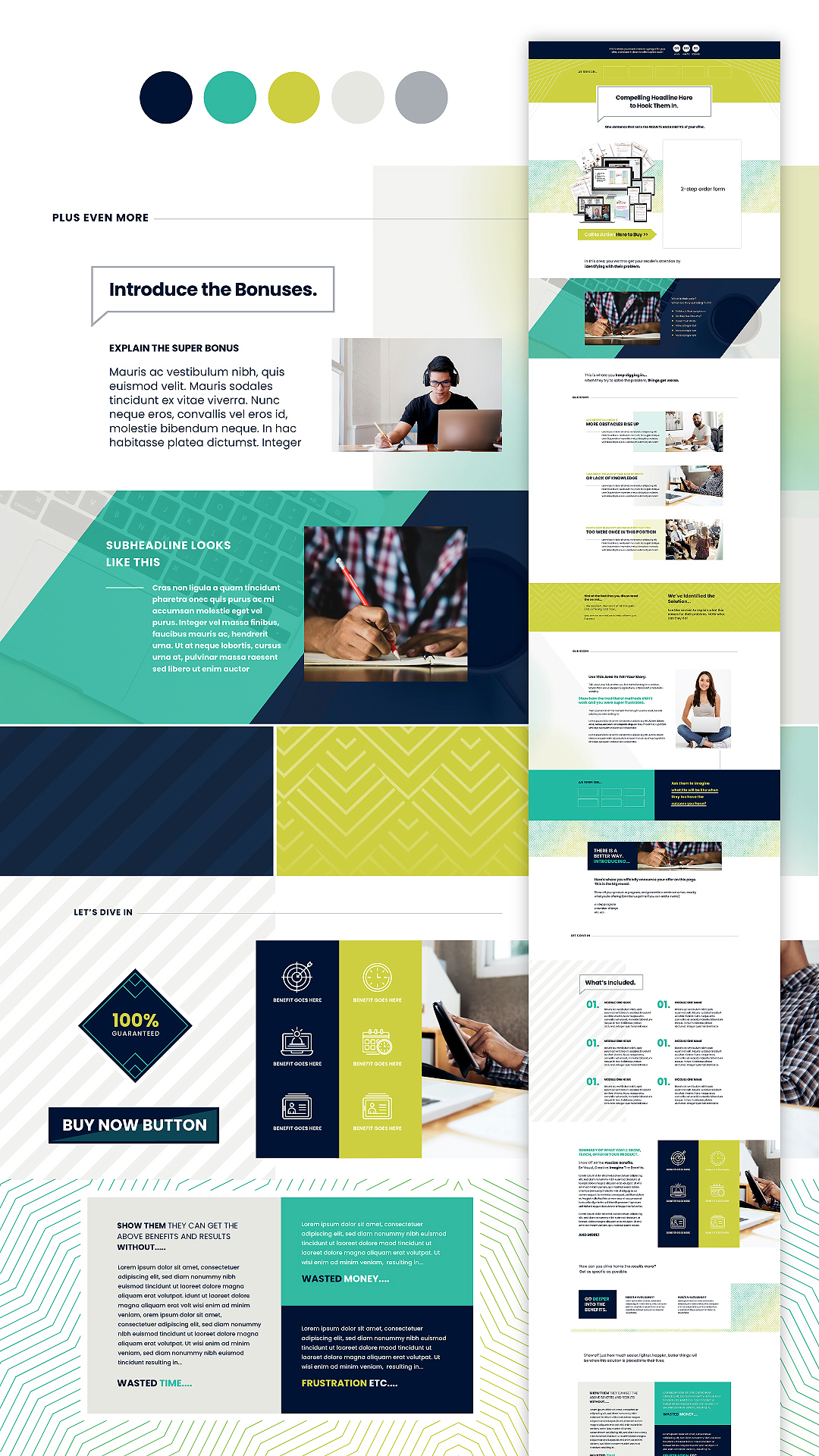 We cannot wait to see you inside, and all that you will create! 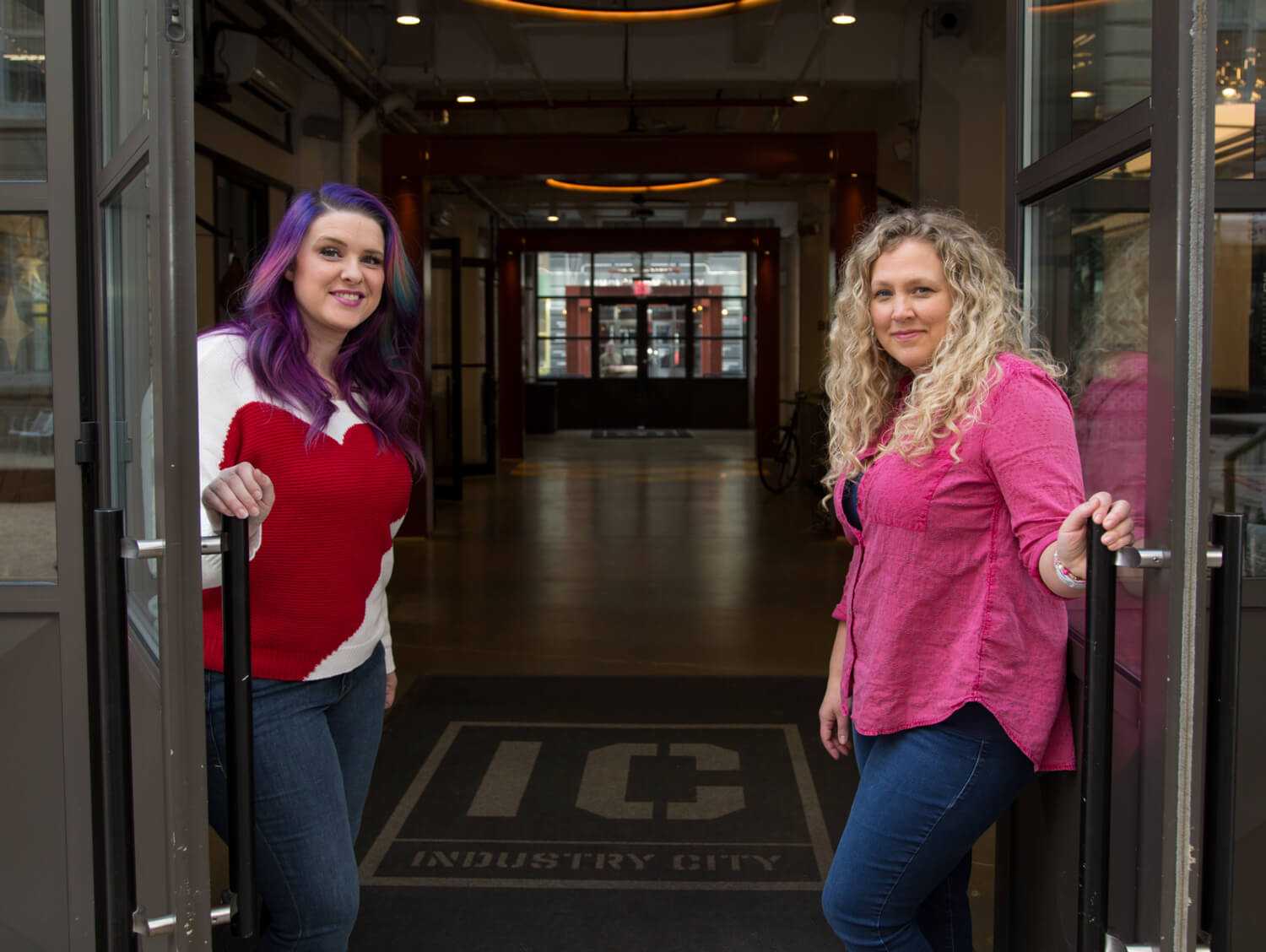